The Difference Between Grilled Cheese, Paninis and Toasties

In the grand scheme of things, the difference is negligible. We don’t refuse service to those mixed up souls who come to us seeking paninis, and we tell lost Americans looking for answers that a toastie is the same as a grilled cheese, but it’s all lies. To the connoisseur, the melted cheese aficionado and toastie obsessive, the three sandwiches are wholly different beasts. I have therefore decided to clarify, for the uninitiated, the difference between grilled cheese, paninis and toasties.

I’ll grant that my definition is not entirely unbiased, but it is based on solid research, and probably permissible in court. 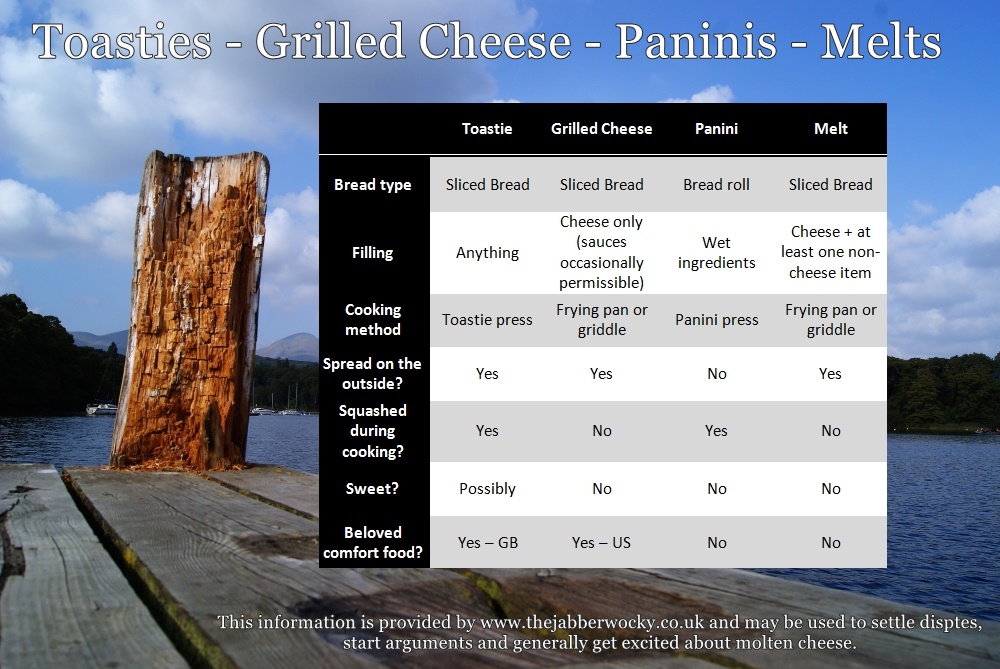 Summaries in a scientific-looking table on a sunny Cumbrian background.

What is a Grilled Cheese?

Grilling, in the US, usually means cooking on a wire grill pan over direct heat – a BBQ, for example. Grilled cheese, by contrast, is something that is done in a skillet. A skillet, for those not in the know, is a frying pan. So this is bread, spread and cheese, cooked in a frying pan. Furthermore the Americans, being somewhat more advanced in their fast food language, have also defined a “melt” which is a grilled cheese containing anything beyond the above three components. Technically, what we serve in the Jabberwocky is not a grilled cheese at all, it’s a melt. In tuna, for example: 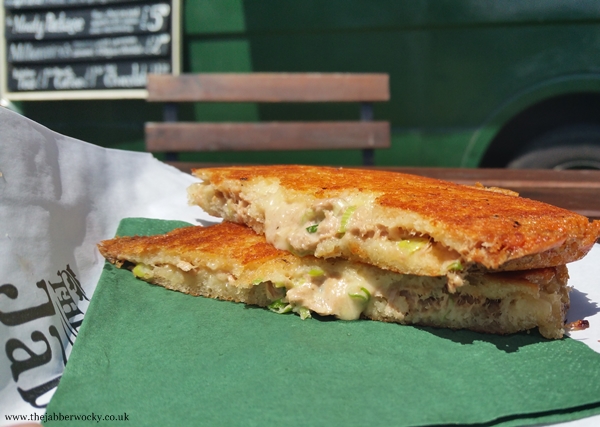 There is  no shame in accidentally referring to a toastie as a grilled cheese though. It’s a big topic that even the US obsessives can’t agree upon. The idea is that you showcase the cheese, with minimal additional faff. Hard to believe the country that invented Kraft singles would actually want to show off cheese, but they do. It is perfect for mild but pleasingly flavourful cheeses like Comte or ewes’ milk cheese, in case you were wondering.

What is a Panini?

Panini is literally the Italian word for sandwiches. Plural. Just one would be a panino. Here in Britain  it’s accepted as a sandwich made in some kind of rectangular or cylindrical roll, then toasted on a panini press. Cheese is expected but not vital, and there are no formal requirements for the fillings. 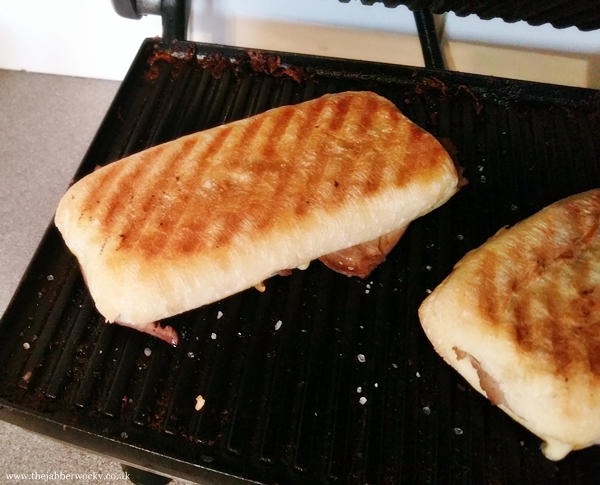 There is somehow more value attached to a panini than a toastie. The posher sounding name might have something to do with it, or the fact that you get a whole roll to yourself, rather than two slices of bread. The bread is a more important feature here, as it provides the bulk of what you eat, unlike a toastie or grilled cheese, where content is king. I personally feel that the panini is best reserved for very moist fillings: steak, wet mozzarella and general Italian vegetable goodness, probably including basil. It has better structural integrity than a slice of bread, after all. Ciabatta or foccacia are preferable to baguette, but as long as you squash it, preferably with some artful grill lines, it’s a panini. 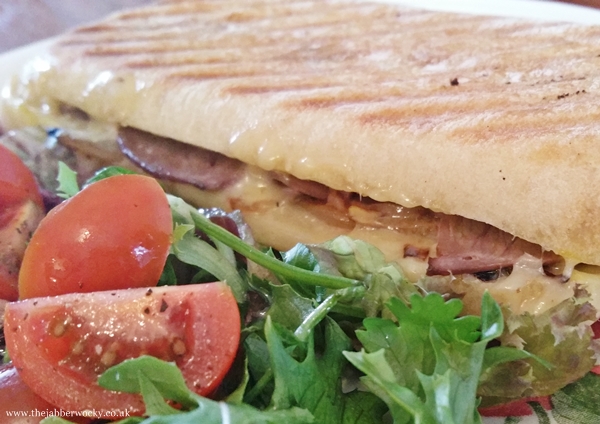 What is a toastie?

Excellent question. A toastie is very specifically sliced bread, filled and then heated and sealed between two metal surfaces, to prevent leaks. Cheese is important, but not vital, and fillings are classically based around this, preferably with a nod to 1980s nostalgia (see prawn cocktail or lobster thermidore), when toasties were the next big thing. 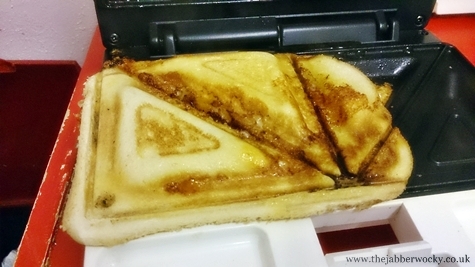 Classically they should be cooked in a Breville three sizes too small for the bread,  and over-filled to make closing a Breville nearly impossible. Ideally there should be cheese everywhere.

We use a slightly less sophisticated method, and squash between two shaped plates of steel, to still give the desired sealed effect without excessive loss of cheese and to permit the creation of ridiculous and excessive triple-decker toasties like this one. The bread is here as a vehicle for the filling. An excellent loaf is important, but doorstop slices are unnecessary bulk in what should be a toasted pocket of cheese-filled delight. 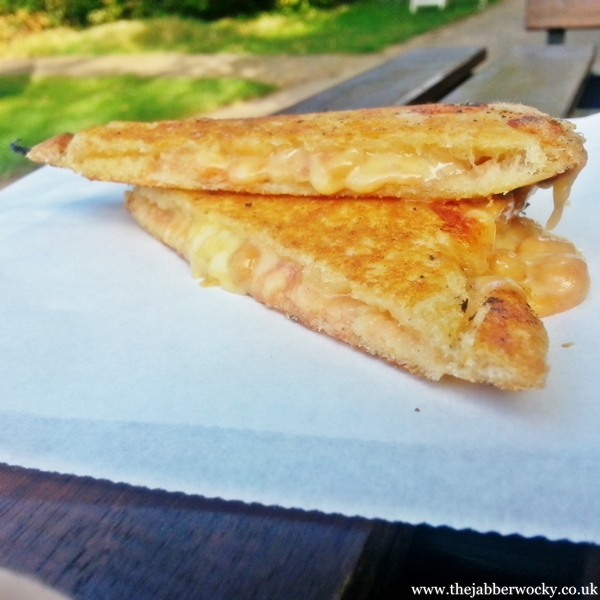 Grilled cheese is for testing that amazing cheese you found at a food fair. Paninis are for using up bits and pieces left over from dinner last night. For combining flavours, experimenting with ingredients and generally embarking on a voyage of cheese discovery, there is the toastie. But you can still call it whatever you like, we don’t judge.

Your next step is to check out our recipe page for more inspiration or to track us on down on social (Facebook, Instagram or Twitter?) and come and judge yourself.

While I don’t see anything wrong will grilling them on a BBQ, things cooked on a
griddle are also called “grilled”. Which is probably where Grilled
Cheese Sandwich comes from.
http://english.stackexchange.com/questions/160086/why-is-something-fried-on-a-griddle-called-grilled

Now, even to those who love them, the only real difference is how they are most commonly made. You can try to be a connoisseur, but then you lose focus on what is important and that is how tasty toast and cheese is!

That said, a Grilled Cheese is typically made with American Cheese, which melts rather easily and in the time it takes to toast both buttered sides with a lid on the pan. Any cheese that falls out usually ends up crisp, delicious, and still stuck to the bread. Note the American Cheese is similar to the idea of cheese wiz or American Cheese on a philly. It’s popular, but only because of ease of use and nostalgia. Real cheese is always better.

I’ve also made them by toasting bread in a toaster, slapping a few pieces of
cheese in between and nuking long enough to melt the cheese which is not nearly
as good and appalling to many a connoisseur, but it makes for a quick, mostly hands off, meal and tasty enough with tomato soup. ^_^

what about cheese on toast welsh rabbit and crock moisure

Grilled Cheese Vs. Panini Vs. Toastie... Which One Is The Comfort Food Champion?

[…] some time now, there has been much debate over which toasted sandwich, specifically, is the best, out of versions that hail from the UK, the […]

Which Panini Press Is Best For Home Use?

[…] while sandwich sticklers will argue the technical and subtle different aspects between a panini, a grilled cheese, and a toastie, for our purposes, we seek to identify the best […]